SAM MOST- Jazz Flutist The "Father of Bebop Flute" 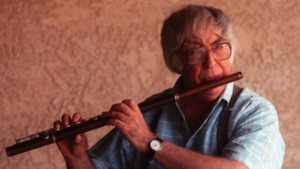 Sam Most, a pioneering jazz flutist who performed with a stylistically diverse range of artists, including Tommy Dorsey, Donald Byrd, Herbie Mann and Charles Mingus, died Thursday at the Kaiser Permanente Medical Center in Woodland Hills. He was 82.

Most had cancer, said his brother, Bernard.

Jazz historian Leonard Feather once called Most "probably the first great jazz flutist," who began his career in 1948 playing with Dorsey.

Sam Most: A news obituary of flutist Sam Most in the June 15 LATExtra section incorrectly described jazz musician Yusef Lateef as younger than Most. Lateef is older. —

"Though his sound may not be 'legitimate' by orthodox standards," Feather wrote in the Los Angeles Times in 1978, "he is a rhythmically engaging performer whose peppery, witty style may take hold of a set of chord changes and never let go for a half-dozen beautifully constructed choruses."

Known for his scat singing and inspired improvisations, Most has been cited by younger players, including Hubert Laws and Yusef Lateef, as a major influence.

He also was noted for an unusual ability to simultaneously hum and play notes on the flute, a skill that he said gave his music an airy sound. Many flutists have credited him with being the first to hum and play at the same time.

He developed that skill in the early 1950s, after discovering that if he hummed while he played, he made less noise with his instrument. That was desirable when he was practicing in his New York City apartment. "I found that by standing in the closet, playing and humming the same notes, I could hear myself and not disturb the neighbors," he told The Times in 1998.

Most was born in Atlantic City, N.J., on Dec. 16, 1930, but moved to New York when he was 4. His Lithuanian immigrant parents loved to sing and encouraged the musical interests of their children, beginning with his older brother, Abe, who became a noted swing clarinetist.

Drawn to the fast tempos and improvisation in the music of Charlie Parker and Dizzy Gillespie, Sam embraced bebop. He studied at the Manhattan School of Music and was a reed player with Dorsey by age 18. He played piano, saxophone and clarinet, but the flute was his favorite.

In 1953 he released his first recording, "Undercurrent Blues," and, according to the New Grove Dictionary of Jazz, "became established as the first bop flutist." In 1954, he was voted Downbeat's "New Star."

He led his own groups and played in other bands, including Buddy Rich's orchestra, which he joined in 1959. After returning in 1961 from a tour with Rich of Asia and South America, Most settled in Los Angeles.

He made more than 20 recordings for labels such as Debut, Bethlehem, Vanguard and Xanadu.

Most, who lived in Tarzana, was a lifelong bachelor. In addition to his brother Bernard, of Durham, N.C., he is survived by two sisters, Fran Tutshen and Ruth Labensky, his twin, both of Long Island, N.Y. His brother Abe died in 2002.

Check out Liquidjazz.com for links to and info on some of Sam's finest works